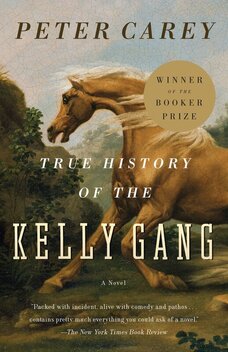 True History of the Kelly Gang
by Peter Carey

…In True History of the Kelly Gang, the legendary Ned Kelly speaks for himself, scribbling his narrative on errant scraps of paper in semiliterate but magically descriptive prose as he flees from the police. To his pursuers, Kelly is nothing but a monstrous criminal, a thief and a murderer. To his own people, the lowly class of ordinary Australians, the bushranger is a hero, defying the authority of the English to direct their lives. Indentured by his bootlegger mother to a famous horse thief (who was also her lover), Ned saw his first prison cell at 15 and by the age of 26 had become the most wanted man in the wild colony of Victoria, taking over whole towns and defying the law until he was finally captured and hanged. Here is a classic outlaw tale, made alive by the skill of a great novelist.
3.83 Stars out of 5
-goodreads.com