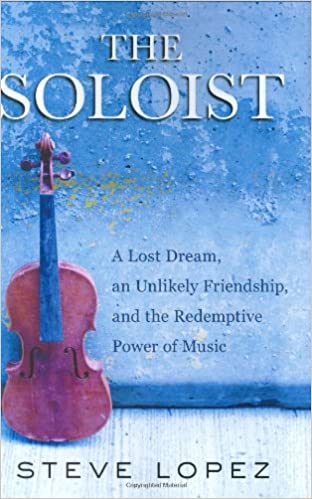 The Soloist
by Steve Lopez

"When Steve Lopez sees Nathaniel Ayers playing his heart out on a two-string violin on Los Angeles' Skid Row, he finds it impossible to walk away. At first, he is drawn by the opportunity to crank out another column for the Los Angeles Times, just one more item on an ever-growing to-do list: "Violin Man."
But what Lopez begins to unearth about the mysterious street musician leaves an indelible impression." "More than thirty years earlier, Ayers had been a promising classical bass student at Juilliard - ambitious, charming, and one of the few African-Americans - until he gradually lost his ability to function, overcome by a mental breakdown. When Lopez finds him, Ayers is alone, suspicious of everyone, and deeply troubled, but glimmers of that brilliance are still there."
From an impromptu concert of Beethoven's Eighth in the Second Street tunnel to a performance of Bach's Unaccompanied Cello Suites on Skid Row, the two men learn to communicate through Ayers's music.
3.90 Stars out of 5
-goodreads.com