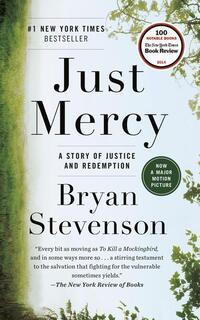 An unforgettable true story about the potential for mercy to redeem us, and a clarion call to end mass incarceration in America — from one of the most inspiring lawyers of our time.

Bryan Stevenson was a young lawyer when he founded the Equal Justice Initiative, a nonprofit law office in Montgomery, Alabama, dedicated to defending the poor, the incarcerated, and the wrongly condemned.

Just Mercy tells the story of EJI, from the early days with a small staff facing the nation’s highest death sentencing and execution rates, through a successful campaign to challenge the cruel practice of sentencing children to die in prison, to revolutionary projects designed to confront Americans with our history of racial injustice.

One of EJI’s first clients was Walter McMillian, a young Black man who was sentenced to die for the murder of a young white woman that he didn’t commit. The case exemplifies how the death penalty in America is a direct descendant of lynching — a system that treats the rich and guilty better than the poor and innocent.
4.61 Stars out of 5
-goodreads.com

What did the group think?

Even though some of the group admitted that they would not have chosen to read this book on their own, the group seemed to enjoy it. The book made them feel that they were getting a deeper understanding of both current and past events. Their initial impression before reading the book was that they were going to learn a lot about racial injustice, however, they were pleasantly surprised when the book touched on other intriguing topics such as teenage brain development.
Out of 4 reviews 2 members gave "Just Mercy" a 7 and 2 member rated it a 10
Average rating of 8.5