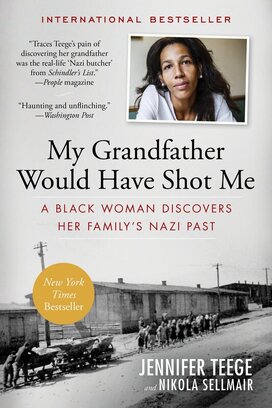 My Grandfather Would Have Shot Me
by Jennifer Teege

An international bestseller—the extraordinary memoir of a German-Nigerian woman who learns that her grandfather was the brutal Nazi commandant depicted in Schindler’s List.
“I am the granddaughter of Amon Goeth, who shot hundreds of people—and for being black, he would have shot me, too.” In an instant, Jennifer Teege’s life turns upside down; the shock of discovering her ancestry shatters her sense of self.
Teege is 38—married, with two small children—when by chance she finds a library book about her grandfather, Amon Goeth. Millions of people worldwide know of him through Ralph Fiennes’ chilling portrayal in Steven Spielberg’s film Schindler’s List. Goeth was the brutal commandant of the Plaszów concentration camp—Oskar Schindler’s drinking buddy, and yet his adversary. Responsible for the deaths of thousands, Amon Goeth was hanged in 1946.
Goeth’s partner Ruth, Teege’s much-loved grandmother, committed suicide in 1983. Teege is their daughter’s daughter; her father is Nigerian. Raised by foster parents, she grew up with no knowledge of the family secret. Now, it unsettles her profoundly. What can she say to her Jewish friends, or to her own children? Who is she—truly?
My Grandfather Would Have Shot Me is Teege’s searing chronicle of grappling with her haunted past. Her research into her family takes her to Poland and to Israel. Award-winning journalist Nikola Sellmair supplies historical context in a separate, interwoven narrative. Step by step, horrified by her family’s dark history, Teege builds the story of her own liberation.
3.78 Stars out of 5
-goodreads.com