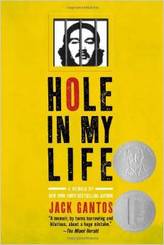 Requirement: Choose 1 book from the following titles or any age appropriate book.

Hole in My Life, Jack Gantos
In the summer of 1971, Jack Gantos was an aspiring writer looking for adventure, cash for college tuition, and a way out of a dead-end job. For ten thousand dollars, he recklessly agreed to help sail a sixty-foot yacht loaded with a ton of hashish from the Virgin Islands to New York City, where he and his partners sold the drug until federal agents caught up with them. For his part in the conspiracy, Gantos was sentenced to serve up to six years in prison.

19 Minutes, Jodi Picoult
Peter Houghton had an extremely normal life. Raised in a normal town. Went to a normal high school. But he was always different. And because of that, he gets picked on. And then he retaliates.  Many people are killed, and many more injured.

The Five People You Meet In Heaven, Mitch Albom
Eddie awakes in the afterlife, where he learns that heaven is not a destination. It is a place where your life is explained to you by five people, some of whom you knew, others who may have been strangers.

Stuck in Neutral, Terry Trueman
Shawn McDaniel’s life is not what it may seem to anyone looking at him. He is glued to his wheelchair, unable to voluntarily move a muscle-he can’t even move his eyes. for all Shawn’s father knows, his son may be suffering. Shawn may want a release, and as long as he is unable to communicate his true feelings to his father, Shawn’s life is in danger.

To the world, Shawn’s senses seem dead. Within these pages, however, we meet a side of him that no one else has seen-a spirit that is rich beyond imagining life. 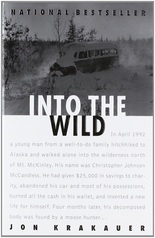 Requirement:  Read 2 books. Into the Wild and 1 Choice Book.

1st Book: Into the Wild, Jon Krakauer
What would possess a gifted young man recently graduated from college to literally walk away from his life and into the deep Alaskan wilderness?

Beowulf
Composed toward the end of the first millennium, this is the classic Northern epic of a hero’s triumphs as a warrior, and his fated death as the defender of his people.